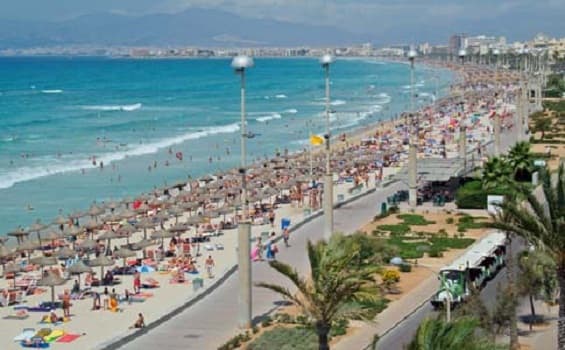 If you look north of Mallorca cathedral (La Seu, or the 'seat' of the Bishopric, to Majorcans) on a map of the city of Palma, you'll see around the Placa Santa Eulalia the jumble of tiny streets that made up the early town. Farther out, a ring of wide boulevards, known as the Avenues, zigzags around these follow the path of the walls built by the Moors to defend the larger city that had grown up by the 12th century. The zigzags mark the bastions that jutted out at regular intervals. By the end of the 19th century the walls were largely torn down; the only place where you can still see the massive defenses is Ses Voltes, along the seafront west of the cathedral.

A streambed (torrent) used to run through the middle of the old Mallorca city, dry for most of the year but often a raging flood in the rainy season, causing destruction and drowning. In the 17th century it was diverted to the east, along the moat that ran outside the city walls. The stream's natural course is now followed by La Rambla and the Passeig d'Es Born, two of Palma's main arteries. The traditional evening paseo (promenade) takes place on the Born.

If you come to Mallorca with DoYouSpain.com, park in the garage beneath the Parc de la Mar and stroll along the park. Beside it run the huge bastions guarding the Almudaina Palace; the cathedral, golden and massive, rises beyond. The park has several ceramic murals by the late Catalan artist and Majorca resident Joan Miro, as well as various modern sculptures.

If you begin early enough, a walk along Mallorca begining at the ramparts in Ses Voltes from the mirador (lookout) beside the Palma cathedral is spectacular. The first rays of the sun turn the upper pinnacles of La Seu bright gold and begin to work their way down the sandstone walls. From the Parc de la Mar, follow Avinguda Antoni Maura past the steps to the palace. At the Plaza de la Reina, the Passeig des Born begins, an avenue with a pedestrian promenade down its center, lined with towering plane trees and fashionable shops. For an even more spectacular and intimate walk up to the Born, retrace your steps to the beginning of Avinguda Antoni Maura and walk left through the Placa de la Llotja (don't miss a chance to visit the Mediterranean's finest civic Gothic building if it's open), then up Carrer de Sant Joan.

The stately town house in Mallorca at No. 1 is the well-known nightspot Abaco. The Des Puig (El Carrer Montenegro) house and en tryway, at No. 2, is under an impressive coat of arms and is worth admiring during your walk around Palma. Check out the Renaissance facade of No. 8, the 16th-century Can Solas (El corner of Carrer Sant Feliu) Take note of the sculpted masks on the doorway at No. 10,known as Casa de Ses Carasses (El Carrer Sant Feliu). The 14th-century church of San Nicolau (La Plaza del Mercat) is notable for its hexagonal bell tower.

The Forn des Teatre (Theater Bakery; El Placa Weyler 12) is a unique shop known for its ensaimadas (a typically Spanish fluffy pastry) and cocas (meat pies). It's near the steps leading up to the right of the Teatre Principal. Take time to appreciate the neoclassical symmetry of the Teatre Principal (El top of the Plac,a Weyler). From here, you can stroll up the Rambla, around the corner and up to the left. It's a 15-minute walk to the top and back, through flower and book stalls. From the Forn des Teatre, you can climb the steps to the Plaga Marques Palmer, where an archway on the left leads to the greater expanse of the Placa Major. A crafts market fills this elegant neoclassical square on Monday, Friday, and Saturday mornings between 10 and 2.

Worth a look is the El Aguila (El Carrer Colom), a department store in an Art Nouveau building. Above a corner bookstore you'll find an interesting Art Nouveau specimen: the Can Forteza Rei (13 Carrer Colom), which its owner, Luis Forteza Rei, designed in 1909. You'll find the 17th-century ajuntament (town hall; El Placa Cort) down the Carrer Colom The olive tree on the right side of the square is one of Majorca's so-called olivos milenarios, thousand-year-old olives, and may be even older The bank Caja de Baleares Sa Nostra (El corner of Carrer Jaume II and the Placa Cort) is in a superb Art Nouveau building.

>When you're ready to sink your teeth into an ensaimada, head for the soothing Ca'n Joan de S'aigo in Barrio Antiguo. Founded in 1700, this cafe-confectionery has been serving sweets longer than anyone on the island, and is known for its ensaimadas. Immense green-glass chandeliers, antique candelabra, and marble-top tables give the room a stately elegance.

One of Palma's oldest monuments, the 10th-century Banys Arabs (Arab Baths) are in a quiet lemon grove. The beautiful 13th-century monastery church of Sant Francesc was founded by Jaume II when his eldest son took monastic orders and gave up rights to the throne. Fray Junipero Serra, the missionary who founded San Francisco, California, was later educated here; his effigy stands to the left of the main entrance. Enter the church and cloisters through the collegiate buildings on the east side.

The eminent 13th-century scholar Ramon Llull allegedly rode his horse into the church of Santa Eulalia in pursuit of a married noblewoman of whom he was enamored in his wild youth. In 1435, 200 Jews were converted to Christianity in this church after their rabbis were threatened with being burned at the stake.

Just south of the Plaza Santa Eulalia, off Carrer d'en Morey, is Carrer Almudaina. The archway over the narrow street was one of the gates to the early Moorish citadel and is now one of the few relics of Moorish occupation on Majorca, along with the Arab Baths. At Carrer d'en Morey 9, peek into the Can Oleza patio, one of Palma's best. At No. 5 is the graceful Renaissance facade of the Museu de Mallorea, which displays Moorish art and some prehistoric bronze objects culled from local archaeological digs.

The Llotja (Exchange), on the seafront a little west of the Born, was built in the 15th century and soon became the most important maritime commodities exchange on the Mediterranean. It's also the Mediterranean's finest example of civic Gothic architecture, with decorative turrets, battlements, and buttresses surrounding tracery-trim Gothic windows and perfectly balanced and fluted pillars.

Just a quick thank you for our car hire in Mallorca last week. A good price and good (nearly new) car. We will certainly use you again!