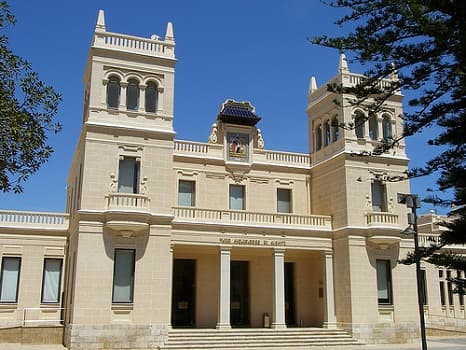 When crossing the lobby of the MARQ and the way to its exhibition rooms, a spectacular audiovisual assembly presents a journey for the marvels in Alicante province, between the sea and the mountain, inviting us to visit its towns and cities, its natural places, its historical and architectural patrimony and, of course, its archaeological wealth. In MARQ we can visit the following rooms: Prehistory Room, Iberian Room, Roman Room, Medieval Room, Modern and Contemporary Room, Archaeological Subaquatic Room, Archaeological Urban and Archaeological Country Room, all of them located in an emblematic building of Alicante city.

With the purpose of making more accessible the museum to all citizens, new prices have been introduced with important reductions for youth with 'Carnet Jove', children and students, and retired, without forgetting that visitors can buy a family entrance with a guided tour only for 1,5 Euros plus the standard fee of 3 Euros.

100.000 years ago
According to archaeological studies, the human occupation of the territory of Alicante goes back to the Middle Paleolithic, about 100.000 years ago. We find in the first room of the museum remains of the Prehistory Era and the journey concludes in the Orientalizant Period. Many objects are exposed according to their time showing illustrations of their elaboration processes and utility. This room also has two interactive places with information about archaeological excavations.

Iberian room
In the next visit we discover the Iberian culture, it treats the economic, social and religious aspects of the town of Alicante. Two-handled jars, ceramics and decoration objects, as well as terracottas of feminine heads are vestiges of this culture that left their print in these lands.

The Romans
Around the Mare Nostrum is dedicated the Roman Room, a space structured in three blocks. The first block treats the first days of the Roman presence in what today is the province of Alicante. The second is dedicated to the cultural, economic and social manifestations of the Roman Empire. In these area an enormous audiovisual film is projected on two huge screens which projects several scenes of the Roman city of Lucentum. Finishes this part of the exhibition the end of the antiquity, the Roman empire disappears and the Christianity becomes the unique and dominant religion.

Medieval Age
The archaeological remains that here are exposed show how the residents of these lands incorporated themselves in these dates to the process of development of two big civilizations, the Islam and the Feudal Era.

More than 300 pieces and currencies dated before the XV century are shown in this room, giving a vision of the daily life of men and women in the Medieval Age. It is also present, by means of ceramic and cultivation tools, chandeliers, and unique pieces, the culture of the water and the irrigable that so important was in these cultures.

Modern and Contemporary Room
The wide period between 1500 and 1932 is in the Modern and Contemporary Room that holds more than 300 pieces relative to the political, economic, social and cultural world of Alicante life at the moment. Homage pieces of Spanish kings - currencies that show the evolution of the Spanish Crown during the history - and numerous objects compose a global vision of the Power of the Crown (1500-1808) and the Constitutional Regimen (1808-1874).

The development registered at the end of the XIX century and begining of the XX century is presented in an audiovisual film and also in an exhibition of the cultural currents of this same period in Alicante, in which the Modernism is highlighted.

The nautical activity also has its space in the MARQ, specially in the Archaeological Subacuatic Room that proposes a journey for this activity from the Antiquity. The hypothetical reconstruction of a Roman craft robbed in a dike and the faithful reconstruction of a supposed collapsed ship in the V century avant Christ show the methodology of work of an subacuatic archaeological excavation.

A hypothetical excavation
In an attractive scenery that goes back in time 2.400 years, a hypothetical excavation is shown in an urban zone of Alicante. Also in the scenery, 14 phases of occupation of the cave are shown: from the Paleolithic one, Middle and Superior, going through the Neolithic, the Calcolithic and the Age of Brass, until the Iberian, Roman, Medieval and Modern times. This way, the MARQ not only shows remains and archaeological images, but also technics of work of the archaeology in action, becoming a modern museum of the XXI century.

Alicante car hire with an honest approach with no hidden costs or last minute extra charges.

Your company got a very good evalution and so we decided to book the car. Your homepage is really clearly and it's a very good navigation to find the right country.The booking is uncomplicated and easy.
J.T